Osteoarthritis is a type of arthritis that is caused by the breakdown and eventual loss of the cartilage of one or more joints. Cartilage is a protein substance that serves as a "cushion" between the bones of the joints.

Primary osteoarthritis is mostly related to aging. With aging, the water content of the cartilage increases, and the protein makeup of cartilage degenerates. Eventually, cartilage begins to degenerate by flaking or forming tiny crevasses.

Osteoarthritis occasionally can develop in multiple members of the same family, implying a hereditary (genetic) basis for this condition. 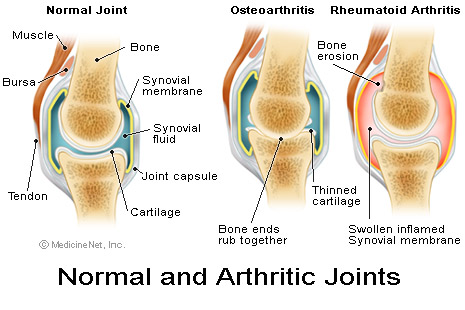 Which calcium crystals occur in the body?

A substance called 'apatite' (a mixture of various calcium phosphate crystals) forms the normal mineral in human bones. In healthy adults apatite occurs only in our bones and teeth and there are no calcium crystals elsewhere. Sometimes, however, calcium crystals form in other body tissues. For example, apatite can form in tendons (the fibrous cords that attach muscles to bones). This condition is called 'calcific tendinitis'. The usual site for this is the shoulder, in the tendon of the supraspinatus muscle that helps move the shoulder joint (see Figure 2). But tendons around the hip, hand, or occasionally other places in the body can also be affected.

Rather than forming in tendons, however, it is much more common for the abnormal formation of calcium crystals to be in the cartilage within joints. This is called 'cartilage calcification', or 'chondrocalcinosis'. This can affect the soft, slippery gristle attached to the bone ends (hyaline cartilage), or the tougher form of cartilage (fibrocartilage) which makes up the free 'spacers' (menisci) in some joints, such as the knee. (See Figure 3)

Iif the crystals move from their protected site within the cartilage or tendon they become exposed to the body's defence systems and can cause attacks of severe inflammation. This movement of crystals out of surrounding tissues into the joint cavity, or out of a tendon into the surrounding soft tissues, is called 'crystal shedding' spell of very noticeable inflammation caused by shedding of calcium pyrophosphate crystals into a joint is called 'pseudogout' or 'acute pyrophosphate arthritis'. The attack caused by shedding of apatite from a tendon is called 'acute calcific tendinitis'. It is also sometimes known as 'acute periarthritis', meaning inflammation not inside, but near a joint.

Why do people get calcium crystal deposits?

If a chemical is dissolved in water in a laboratory there is a certain concentration at which crystals start to develop. Even in healthy people, certain chemicals may be present in the blood, urine or soft tissues at levels which in other circumstances would be high enough for crystals to form. The reason crystals do not usually occur in body tissues and fluids is that there are other substances, mainly proteins, which prevent them developing. These are called 'inhibitors'. Other substances can actually increase the likelihood of crystals forming ; these are called 'promoters'.

This applies to the basic materials needed to make calcium crystals (calcium and pyrophosphate or phosphate). The most likely reason crystals form is because the balance between inhibitor and promoter substances changes. This balance tends to alter as part of normal ageing, but also because of osteoarthritis. The common form of chondrocalcinosis that is associated with ageing and osteoarthritis usually involves just a few joints, mainly the knees. Occasionally the tendency to develop chondrocalcinosis and pseudogout may run in families.

Far less commonly, chondrocalcinosis may be due to a metabolic disease which interferes with the regulation of calcium or pyrophosphate levels.

Examples are conditions such as

1. hyperparathyroidism (overactivity of the parathyroid glands)

Certain foods contain oxalates Healthy individuals can safely consume such foods in moderation, but those with kidney disorders, gout, rheumatoid arthritis and potentially osteoarthritis with calcium deposits are advised to avoid excessive consumption foods high in oxalic acid or oxalates. The calcium oxalate crystals or precipitate (better known as kidney stones) obstruct the kidney tubules. An estimated 80% of kidney stones are formed from calcium oxalate.

The following are some examples of the most common sources of oxalates, arranged by food group. It is important to note that the leaves of a plant contain higher oxalate levels than the roots, stems, and stalks.

Soybeans, tofu and other soy products

There is equivocal evidence for gastrointestinal bleeding or renal (kidney) damage with long-term use of 4 g/day. NSAIDs appear to be more potent, but pose greater risk of side-effects.

In more severe cases, non-steroidal anti-inflammatory drugs (NSAID) reduce both the pain and inflammation; they all act by inhibiting the formation of prostaglandins. Most prominent drugs in the class include diclofenac, ibuprofen, naproxen and ketoprofen Diclofenac has been found to cause damage to the articular cartilage. Another type of NSAID, COX-2 selective inhibitors (such as celecoxib, rofecoxib and valdecoxib) have often been used but are no more effective than the other NSAIDs. The latter two NSAIDs (rofecoxib and valdecoxib) carry an elevated risk for cardiovascular disease.

Oral steroids are not recommended in the treatment of OA because of their modest benefit and high rate of adverse effects. However intra - articular corticosteroid temporarily improve symptoms Opioid analgesics For moderate to severe pain a opioid analgesic such as morphine or codeine may be useful short term. Topical There are several NSAIDs available for topical use (e.g. diclofenac, ibuprofen and ketoprofen) with little, if any, systemic side-effects and at least some therapeutic effect. Creams and lotions, containing capsaicin, are effective in treating pain associated with OA if they are applied with sufficient frequency.

If the above management is ineffective, joint replacement surgery may be required. Arthroscopic surgical intervention for osteoarthritis of the knee has been found to be no better than placebo at relieving symptoms

The majority of patients with arthritis have tried alternative treatments for their pain. Some studies have reported benefits for these approaches, including acupuncture and some supplements.

A 2006 Cochrane review supported the use of acupuncture for pain management in osteoarthritis.

S-Adenosyl methionine (SAMe) has been tested; a review of 10 studies found that it has an effect on pain relief similar to nonsteroidal anti-inflammatory drugs · Frankincense resin from Boswellia serrata trees—Indian frankincense is a traditional treatment for arthritis in Ayurvedic medicine

Antioxidants including vitamins C and E in both foods and supplements, provide pain relief from OA.

Selenium deficiency has been correlated with a higher risk and severity of OA.

Vitamin B9 (folate) and B12 (cobalamin) taken in large doses reduce OA pain.

Vitamin D deficiency has been reported in patients with OA, and supplementation with Vitamin D3 is recommended for pain relief.

Diet appears to be a factor in the aetiology of arthritis based on surveys of over 1400 volunteers during a 20-year period. Plants in the drug family, Solanaceae (nightshades) are an important causative factor in arthritis in sensitive people.

Peppers (Capsicum sp.) of all kinds except the black pepper (family, Piperaceae).

A buildup of cholinesterase inhibiting glycoalkaloids and steroids from consumption and/or use (tobacco) of the nightshades and from other sources such as caffeine and some pesticides (organophosphates and carbamates) may cause inflammation, muscle spasms, pain, and stiffness.

Osteoarthritis appears to be a result of long-term consumption and/or use of the Solanaceae which contain naturally the active metabolite, vitamin D3, which in excess causes crippling and early disability (as seen in livestock). Rigid omission of Solanaceae, with other minor diet adjustments, has resulted in positive to marked improvement in arthritis and general health.

For further details contact Carina This email address is being protected from spambots. You need JavaScript enabled to view it..