Fluorosilicic acid is the most corrosive chemical agent known to man. It is derived from toxic gases produced in the manufacture of phosphoric acid & phosphate fertilisers. Ireland is one of the only countries in Europe to fluoridate it’s water supply. 98% of Europe either stopped, rejected or banned it.

The fluoride in Irish water is flourosilicic acid, a by product of Big Industry

The fluorosilicic acid is recovered from chimney pollution scrubbers as a substance known as scrubber liquor. It contains lead, mercury, arsenic, and high concentrations of radionucleides, hence it is radioactive.

Why do they say it’s good for us?

In the 1940s, researchers investigated cities that had both fluoridated and unfluoridated water. The research found a decrease in the incidence of tooth decay in cities which had added fluoride to water supplies. Since these results were published, fluoride has gained acceptance in the scientific community as potentially beneficial to oral health, and various governments have fluoridated water. This major research was conducted over 60 years ago and there have been many other studies since that demonstrate fluoride is not be beneficial.

Fluoride is an ingredient in pesticides and rodenticides, and is a powerful poison. Each year there are thousands of reports to Poison Control centres in the United States related to excessive ingestion of fluoride toothpastes, mouthrinses and supplements.

Fluoride and the brain

There are 26 peer reviewed published studies showing links with moderate fluoride exposure and lowered IQ in children. Fluoride is used as an ingredient (fluoxetine) in various psychotic and anti-depressant medications.

Excessive exposure to fluoride is well known to cause a bone disease called skeletal fluorosis. Skeletal fluorosis, especially in its early stages, is a difficult disease to diagnose, and can be readily confused with various forms of arthritis including osteoarthritis and rheumatoid arthritis. In its advanced stages, fluorosis can resemble a multitude of bone/joint diseases. Carefully conducted human clinical trials - including two "double-blind trials" - have found that fluoride (at doses of 18-34 mg/day for just 1-4 years) increases the rate of bone fracture, particularly hip fracture, among osteoporosis patients.

According to the National Toxicology Program, "the preponderance of evidence" from laboratory 'in vitro' studies indicates that fluoride is a mutagenic or carcinogenic compound. Fluoride has been found to cause bone cancer (osteosarcoma) in government animal studies and rates of osteosarcoma among young males living in fluoridated areas have been found to be higher than young males living in unfluoridated areas. Osteosarcoma, while rare, is a very serious cancer. Fluoride exposure has also been linked to bladder cancer, particularly among workers exposed to excess fluoride in the workplace.

Fluoride and the thyroid

Fluoride is known as an endocrine disruptor. As fluoride and iodine are similar in size and shape, the flouride in water can attach to your thyroid gland and prevent iodine attaching to your thyroid gland, thereby preventing the thyroid from using iodine to make thyroid hormones. This leads to a condition known as hypothyroid, rates of which are extremely high in Ireland. Up until the 1970s, European doctors prescribed fluoride as a thyroid-suppressing medication for patients with HYPERthyroidism (over-active thyroid).

Excessive ingestion of fluoride during the early childhood years can damage the tooth-forming cells, leading to a defect in the enamel known as dental fluorosis. Approximately 50% - 60% of the Irish population currently have dental fluorosis according to heads of dentistry in this country. This is a form of dental decay on the face of the teeth and is caused only by fluoride.

Fluoride and the kidneys

The kidneys play a vital role in preventing the build-up of excessive fluoride in the body. Among healthy individuals, the kidneys excrete approximately 50% of the daily fluoride intake. Among individuals with kidney disease, the kidneys' ability to excrete fluoride becomes markedly impaired, resulting in a build-up of fluoride within the body. It is well recognised that individuals with kidney disease have a heightened susceptibility to the cumulative toxic effects of fluoride.

Fluoride and the gastrointestinal tract

A single ingestion of as little as 3 mg of fluoride, in carefully controlled clinical trials, has been found to produce damage to the gastric mucosa in healthy adult volunteers.

According to the current consensus view of the dental research community, fluoride's primary benefit to teeth comes from topical applications to the exterior surface of teeth from fluoride containing toothpaste, not from ingestion. Tooth decay rates have fallen at similar rates in all western countries in the latter half of the 20th century, irrespective of whether the country fluoridates its water or not.

Calcium fluoride is an organic or naturally occurring mineral found in all water sources, such as lakes, rivers, groundwater and oceans. As it is natural it has many health benefits such as improving the strength of teeth enamel, veins and the overall elasticity of tissues. Calcium fluoride is prescribed homoeopathically for these and other symptoms. During tooth development, fluoride binds to the hydroxyapatite crystals present in enamel and makes the enamel more resistant to demineralisation by acids.

Fluoride is in Bottled Water! 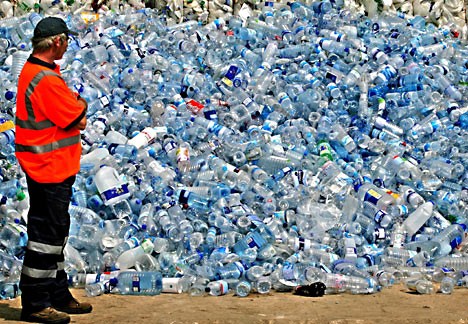 Most people dont realise that bottled water is only filtered tap water in most cases and as fluoride is not removed under normal filtration processes, most bottled water contains fluoride. Bottled water also poses an environmental nightmare to say the least. The most environmentally friendly way to filter your water is using a Carahealth Gravity Fed Water Filter that uses no electricity ever and leaves the healthful minerals in.

Medicating us against our will is unethical

What you can do.....Join campaigns for a Fluoride Free Ireland. See;

For further details contact Carina Harkin BHSc.Nat.BHSc.Hom.BHSc.Acu This email address is being protected from spambots. You need JavaScript enabled to view it.

Cookies are short reports that are sent and stored on the hard drive of the user's computer through your browser when it connects to a web. Cookies can be used to collect and store user data while connected to provide you the requested services and sometimes tend not to keep. Cookies can be themselves or others.

So when you access our website, in compliance with Article 22 of Law 34/2002 of the Information Society Services, in the analytical cookies treatment, we have requested your consent to their use. All of this is to improve our services. We use Google Analytics to collect anonymous statistical information such as the number of visitors to our site. Cookies added by Google Analytics are governed by the privacy policies of Google Analytics. If you want you can disable cookies from Google Analytics.

However, please note that you can enable or disable cookies by following the instructions of your browser.